To develop the concept of the show of the world premiere of the concern’s new car unveil. To create multimedia content and prepare a technical setup for the show and to be in charge of 3 shows held within a day. 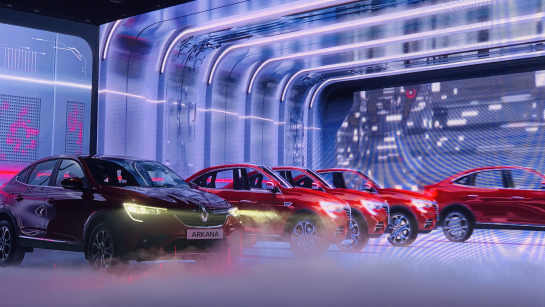 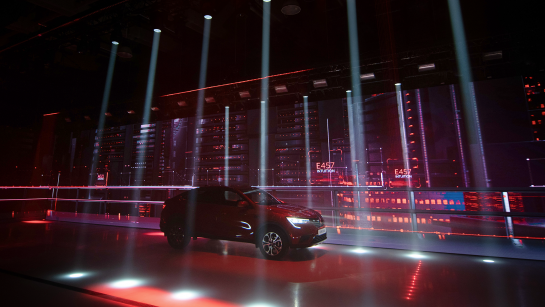 The presentation of the new Renault model was the most anticipated automotive premiere in the spring of 2019. New coupe-crossover ARKANA is being produced for the domestic market and for export only at the factory in Moscow. For such an event, we had to find a unique location that would reflect the nature and status of the event. We have found it in the very heart of Moscow, at the Red Square footsteps: after long negotiations for the first time in its history a commercial presentation was held in Zaryadye Park.

For the project we worked in conjunction with an event agency V4M. Our team was responsible for the future show at every stage — from the initial concept development and storyboards to final audiovisual content creation and technical setup.

The premiere took place on 23 May 2019. The show was broadcast live around the world. The main hero of the evening was a bright red car, whose name is derived from the Latin word «Mystery». For the show we used a 120 sq.m + LED screen, powerful scenic light and sound solutions, smoke machines, stage winches and lasers. The total capacity of the equipment involved in the presentation was 350 kW. With the development of the plot of the show the car moved forward, arriving in the final in a specially arranged photo zone. We also organized another photo zone with a second car especially for numerous journalists and worked out a number of animated screensavers and video content supporting the speakers after show.

In a 4-minute video, as the story unfolded on a 30 m long screen, we traced the path of creating a new model from the factory assembly to the fast paced drive in futuristic urban surroundings. At the heart of the creative concept was the idea of 5 USP, or forces that encapsulates the new model. The transition to each new location, presented in the content, symbolized a conquest of a new power: the powers of thought, character, will, intuition, spirit. Original music for the show was written and dynamic light scenarios set.

The event was a great success. After the presentation of the car to the public, the first batch of Renault ARKANA was sold out in a few hours, and is currently being sold only on pre-order.