To invent and develop 7 interactive movie-based multimedia installations for the City Day celebration. 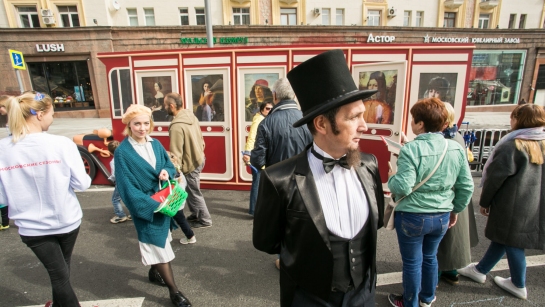 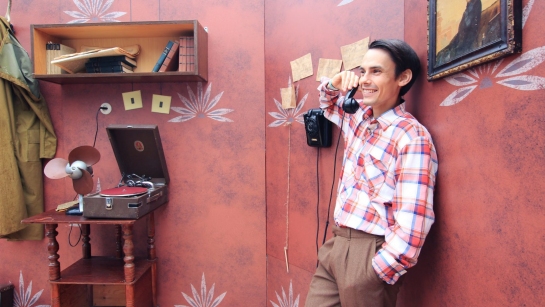 Pitch Bureau took part in the preparations for the celebration of Moscow City Day 2016 and the Year of Russian Film. Using iconic Russian films, we created a series of 7 interactive installations. During the festive weekend, installations were mounted along the Tverskaya Street in special zones devoted to specific films.

For example, in the film Guest From the Future, one of the characters discovers that in the future there’s a bus that teleports passengers to other locations. We recreated the physical copy of the teleporting bus from the film, and behind 5 of its doors we placed the retro-futuristic videos of Moscow in 2084, when the movie action takes place. After approaching the bus and opening the relevant door, a passersby could see the Moscow of future behind it.

Another installation in the Guest From the Future zone was an enlarged copy of the Mielophone, a mind-reading device from Kir Bulychev’s books. When touched with a hand, Mielophone began to glow from within and voice the "random" thoughts of the passersby.

Using the structural elements and household items from the 1950s-70s, we recreated the interiors of four rooms in a Soviet communal flat for the Pokrovsky Gates film zone. The installation revolved around modified phones of that era. Every few seconds the phones would ring. Passersby who would pick up the phone, would hear the catch phrases from the phone conversations of this comedy’s characters.

For the zone of the War and Peace film, we developed the Movie Character interactive installation, which analyzed the visitors’ biometric data and used it to determine which of the novel’s characters they resemble. In order to do that, each visitor had to stand on the weighing platform and press the palm to the sensor, which determined their pulse and emotional state. The results of this simple test were displayed on a large screen accompanied by the image of one of the characters from Sergei Bondarchuk’s eponymous movie and his short psychological portrait.

Another 3 installations with augmented reality and original engineering solutions were created for the films "The Meeting Place Cannot Be Changed", "Night Watch" and "Ivan Vasilievich: Back to the Future".