To develop and implement the concept for a series of urban multimedia installations commemorating the Year of Russian Cinema. 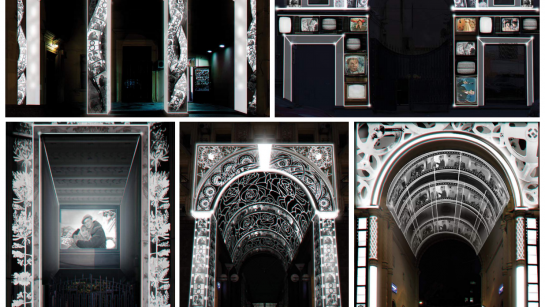 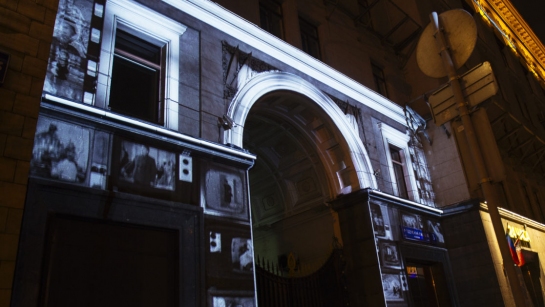 To decorate the central streets of Moscow for the celebration of the Year of Russian Cinema, we developed the Interactive Moscow concept of urban installations utilizing dynamic lighting and multimedia and interactive solutions.

The segments of the reel displayed shots from the classical Russian and Soviet movies by different directors that depicted Moscow. To create stylistic consistency, we made sure that video content on all six screens worked well both together and separately, blending visually. Uniform animation effects using low polygonal 3D elements and motion graphics were utilized in the opening and ending sequences of each episode. Video with a total length of 2 minutes played in a loop around the clock.

A part of the overall concept was the themed video mapping, which was projected for 2 weeks on the arches of 5 buildings located at the main street of the Russian capital — Tverskaya St.. Each of the arches was dedicated to the famous classical Soviet films in different genres — science fiction, comedy, history and war, romance, and musicals.

To accomplish this task, we performed 3D-modeling of the arches, made calculations to determine technical specifications, and designed 45-second videos for the mapping. Following that, we assembled temporary Layher carcasses for the servers and projectors. To preserve uniformity of style, a black-and-white half-tone scale without chromatic colours was used. The movie shots were treated with artificial visual noise, scratch, burning celluloid and glimmering effects to create a sensation of watching archive shots.

The use of video mapping installations that were bound by the common concept and had created a single walking route along the Tverskaya Street helped to draw attention to other themed installations and public art sites located along the road, thus creating a unified ambient urban environment.