Using existing archives and Eldar Ryazanov’s personal belongings, to plan and implement the concept of a multimedia exhibition timed to coincide with the late film director’s 90th anniversary, encompassing all spheres of his work and giving the visitors an idea of how versatile and talented he was both professionally and in his personal life. 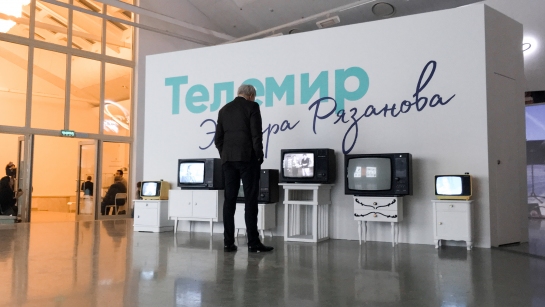 Between 18 December, 2017, and 1 February, 2018, the New Manezh exhibition hall is hosting the "Immense Ryazanov" multimedia exhibition dedicated to the 90th anniversary of Russia’s most popular film director. The exhibition can be rightfully called the key event of this jubilee year.

We began working on the exhibition’s concept in the summer of 2017, when we were approached by Ryazanov’s stepson Oleg Berdyugin. Oleg wanted to organize a large-scale memorial exposition that would incorporate information about all areas of the great film director’s life — beginning with his artistic legacy and ending with the ruminations on the nature of his talent, shared by his colleagues and loved ones. Together with Oleg, we began tweaking the creative concept and designing multimedia content. In the fall of 2017, when the greater part of the exhibition was already planned out and approved, Oleg died unexpectedly. We were now fully responsible for the project. We carried it through, carefully preserving all of Oleg’s ideas and making some additions that expanded the exhibition.

Working together with Eldar Cinema Club, we carried out the full cycle of prep work — design and creation of the show’s visual identity, script preparation and content production, site development and equipment assembly, commissioning, start-up and engineering support for the exhibition. We partnered with Plan A agency for decorations and Yarko-Yarko for lighting solutions.

Using a floor space of more than 1,200 sq.m. within the New Manezh and state-of-the-art technologies, we created a unique interactive-and-multimedia environment that allows the visitors to immerse themselves in the film director’s original universes. The exposition takes up three halls, full of multimedia, interactive and tactile installations, real artifacts from the films, the actors’ costumes, Ryazanov’s personal belongings and documents from the archives. The visitors can also find a number of actual sets from the movies and some digital decorations, along with the movie theater showing all of Ryazanov’s films. We also made a special 30-minute virtual tour, using combined animation, studio work and video mapping, which tells the story of Eldar Ryazanov’s life with the help of his friends and favorite actors — Oleg Basilashvili, Liya Akhedzhakova, Svetlana Nemolyaeva, Alexander Shirvindt, and Nikolai Fomenko.

It was a very lively, cheerful and ambient exhibition. We were happy that it got high marks from the late film director’s friends and loved ones, especially his widow and Oleg’s mother Emma Abaidullina-Ryazanova.